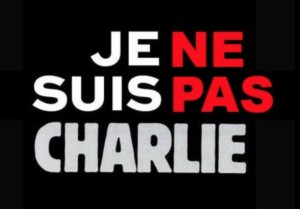 n January, I wrote a blog suggesting that the word of the year might already have been coined. In the aftermath of the Charlie Hebdo massacre in Paris, I noted how #jesuischarlie had emerged not only as hashtag of solidarity with the French satirical magazine itself but also as a statement for freedom of speech itself. I further speculated that #jesuis may have established itself as a Twitter prefix that would establish itself as a statement of belonging.

The appalling decision of the Charlie Hebdo team to publish two cartoons mocking the death of Aylan Kurdi, the three-year-old Syrian child whose image propelled the migrant crisis across Europe into the consciousness of everybody, has changed all of that.

I won’t describe the cartoons or reproduce them. They have had quite enough oxygen already. Instead let’s focus on the immediate change this has made on social media. Apart from a small number of supporters, #jesuischarlie as a hashtag and a word is now discredited. People are using it on postings as a way of distancing themselves from the mood a few months ago, using the term now becomes a way of emphasising what it stood for and what has therefore been abused.

Instead, #jenesuispascharlie is being used to condemn Charlie Hebdo. Rather than being a term which could take on generic significance, this is simply an attack on the organisation, anger directed at them for wasting the stock of goodwill they had been given, anger even for polluting the term itself.

Calls for freedom of speech will go on, of course they will, and other causes will be found and become the new focus of social media and comment. New terms will come forward to be the one of choice to express adherence to the philosophy. But #jesuischarlie will not be that term, #jesuis will not become a new prefix. That moment has gone.

We may still end up saying that #jesuischarlie is the word of the year. But the narrative we will now tell will be of how a word flourished and died within a year, rather than that of a word which become important and then continued to resonate for many years to come.