We all know that a beautiful sunrise can be a fabulous thing. But astronomers have now identified something which might be even more spectacular to view, if you weren’t being ripped apart by gravitational forces at the time, that is.

The two-planet system Kepler-36, a mere 1,200 light years away, features two planets which are closer to each other than any other pair of planets found in the past. Kepler-36b is just under 11 million miles from its star, while its large, gaseous neighbour, Kepler-36c, is only 1.2 million miles further away.

All of this proximity means that every 97 days, 36c appears to rise in the sky as it passes its smaller, rocky chum, leading to a phenomenon which astronomers have named Planetrise. 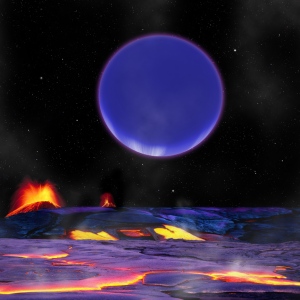 Fabulous as it must look, the event causes huge gravitational tides which stretch and squeeze both planets.

Given that this is the first time this has been observed, it seems unlikely that planetrise will become a term which will we see a great deal of in the future.

And if planetrise should ever come to Earth on a regular basis, you can assume that the planets in our Solar System will have shifted their orbits to such an alarming degree that there will be nobody left back here to write blogs about it.