The arrival of the new edition of the American Heritage Dictionary is no ordinary dictionary launch – it really is a new edition for the interconnected age.

But before we get to that, let’s deal with Wordability’s bread and butter. While there are 10,000 new words in this latest edition, and some great ones at that, the list tells us less about very recent language trends than the new UK volumes that Wordability recently discussed. This is because those books were annual updates. The American tome is a brand new edition which has been 11 years in the making.

Instead, what many of the new additions demonstrate is the English language’s endless creativity when it comes to the formation of new words. And this, of course, is what Wordability loves. Flexitarian, a vegetarian who occasionally lapses and eats meat or fish, is a wonderful example of English being a flexilanguage (note to American Heritage Editors – you might want to consider flexilanguage in your next edition, as in ‘English is a great flexilanguage which exhibits superb wordability’. At this rate, I could have my own dictionary.)

I am also fond of backronym, which is the formation of an acronym from a previously existing word. For example, wiki is a collaborative website, but it is also now an acronym, or more properly backronym, standing for ‘what I know is’. While I remember, I should mention I look forward to lots of snow (something new on Wordability) in the next few months.

The dictionary also has a spectacular array of scientific words, such as Spaghettification, the extreme stretching of an object by tidal forces and therefore nothing to do with the effect that pasta restaurants are having on the high street. Most magnificently of all comes uvulopalatopharyngoplasty, A surgical procedure for treating severe obstructive sleep apnea, a word that probably takes as long to say as the surgery does to perform.

But what is most interesting about this release is the marketing plan behind it. There is a large print edition, of course, but buying this now gives users access to a website and an app, so that they can look up words on the moves. The publishers still expect to sell a lot of hard copies, but they also recognise that nowadays, people simply look words up on whatever electronic device comes to hand. 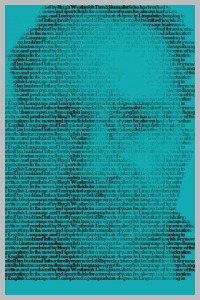 Most entertaining of all is the You are Your Words website, launched to coincide with the new edition. This fun site allows you to put in a photo of yourself, together with some words which you feel sum you up (and put on the spot to come up with at least 400 characters is harder than it might appear). The site then gives you a picture of yourself drawn in words. You can even play around with the colours. This is how your Wordability author looks in blue.

We are asked to describe ourselves all the time in all sorts of settings – meeting people at parties, getting to know new colleagues, submitting CVs. We always think of these things as words on a page, not images. While the Your are Your Words image is a bit of fun, it might stop to make us think about the image of us people form when we start to speak.